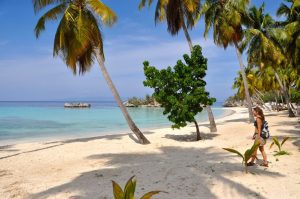 My first few years at college were enjoyable, but hard work. I didn’t have much time or money for having fun, what with being at college full time, surviving on scholarships, and trying to make extra money in any spare time I had through baby sitting. As much as I wanted to be independent, I often daydreamed of meeting some tall, dark handsome stranger, someone who was dominant and who could take control.

As the summer approached, I looked around for work, not excited one bit by the thought of working all summer and still being penniless, however I knew it would all be worth it when I graduated. It was when I was mindlessly scanning the ads one day that I came across a classified for a 3 month position as an Au Pair. This would fit into my summer schedule perfectly, and what’s more – it was in Haiti! Going to a new place to work for a few months sounded like such an adventure.

I made contact, and to cut a long story short, I got the Au pair job, working for an extremely wealthy business man with a small son. I was so excited, we seemed to get along very well when we spoke on the telephone, and the position was well paid – I would be able to save quite a bit.

I arrived at the airport feeling excited, a tiny bit nervous, but mostly eager to see what my trip had in store for me. Michael, my new employer, was there to meet me, and I instantly noticed his tall, dark, strong physique and good looks. His piercing eyes met with mine and I could tell there was an instant attraction.

That evening, I spent time with the child, and then after he was in bed, I spent time drinking wine with Michael. There was definitely an attraction, and when I went to my room eventually, I could feel an excitement and curiosity.

I settled into the job really quickly, had a great rapport with the small boy, enjoyed the beaches, and looked forward to Michael coming home in the evening, to the point I would have butterflies in my stomach about seeing him. He had a great presence, and made me feel quite submissive, which I liked a lot. He was powerful, not just in his physicality, but had an irresistible aura around him that made me feel weak at the knees.

It was during one of our relaxing evenings at home that the inevitable happened. We were talking, winding down, drinking wine, and he was moving closer with each breath, and before I even realised what was happening, eventually he was kissing me. Of course this was exactly what I wanted, my tall, dark handsome stranger fantasy coming true, and I could feel his power over me.

The rest of the summer was spent with many more of these hot romantic evenings in paradise. To describe them as amazing would be an understatement. However, as much as I was in heaven, I was dedicated to return to the US mainland ready for my final year at college, having a future career is everything to me. One thing is for sure though, those memories are more than enough to get me through a boring study break, and who knows, I might decide to spend my next vacation in Haiti.